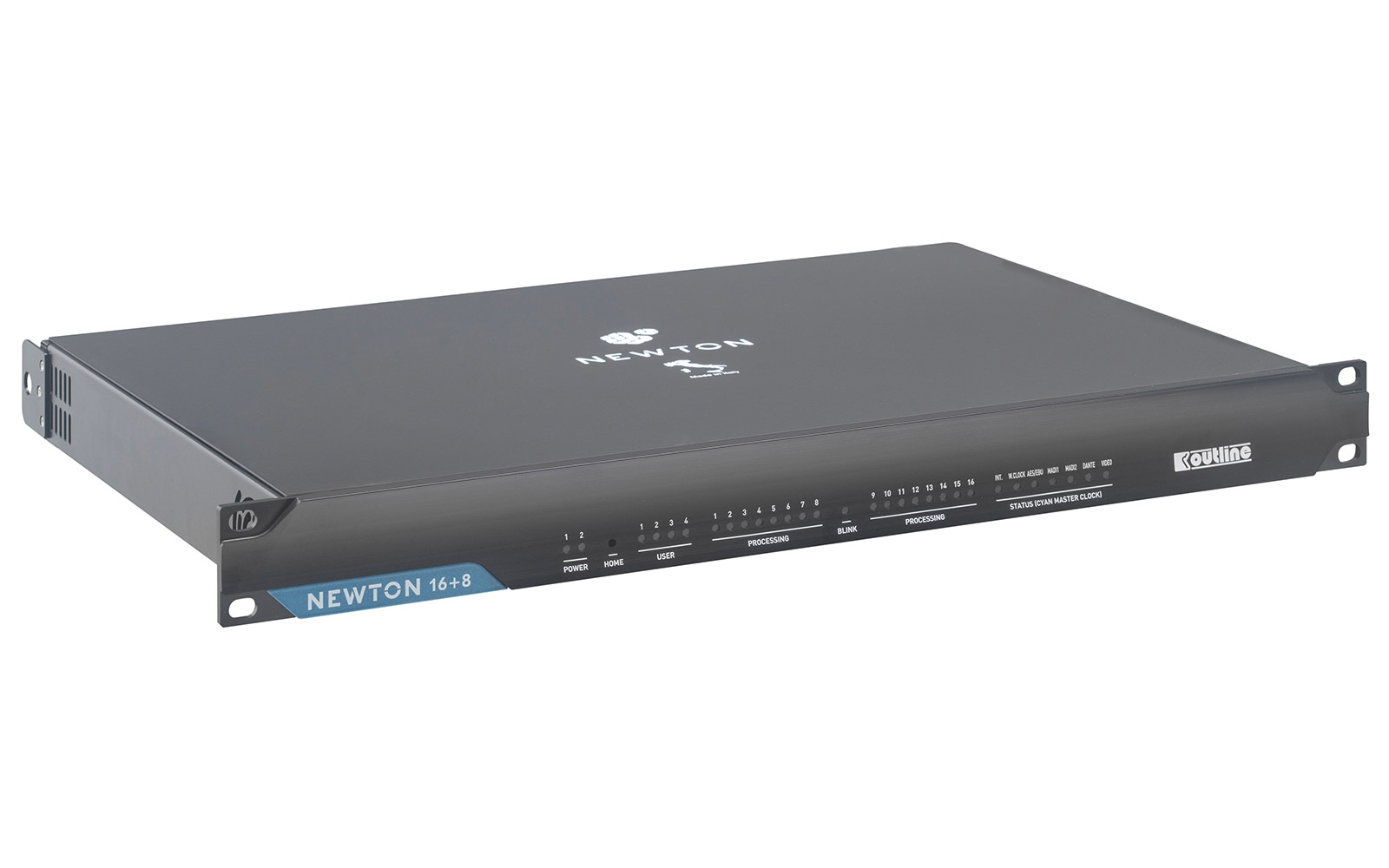 UP TO 15 DIFFERENT OPTIONS
FOR CLOCK SOURCES

UNRIVALLED INPUT AND OUTPUT CONFIGURATION:
216 IN BOTH DIRECTIONS SIMULTANEOUSLY

AVAILABLE IN THREE HARDWARE VERSIONS
TO SUIT THE APPLICATION OR PROJECT

ALL MODELS ENGINEERED INTO
A SINGLE RACK SPACE (1U) CHASSIS

All processed signals and direct outputs can be routed out of Newton using any of the available audio standards. This, as just one example, would allow signals to be received over MADI, processed and then transmitted to multiple amplifiers on Dante with an AES3 output for backup. This direct out, processing and routing ability can also be used to create a backbone for a multiple Newton Network to share signals.

Internal processing is all at 96 kHz, with an internal data depth up to 64 bits. In each processing section users have precise control over Level, Delay, Polarity and Raised Cosine Filters (implemented within WFIR Equalisers), all functions that are required to manage and optimize a loudspeaker system.
While Newton 16 is an all-digital device, Newton 16+4 and Newton 16+8 add the useful capability of local analog inputs and outputs.

Each Newton processor combines powerful WFIR filters (unique to Outline), clock management and a very high number of input and output channels (216 x 216). Internal synchronous and asynchronous sample rate converters manage all I/O operations and Newton can be synchronised with any one of the 14 choices of clock sources. Mix and Match Matrix I/O routing allows translation and re-distribution of digital audio over multiple standards simultaneously.

Combining power and flexibility with an easy to use control interface, Newton forms the nucleus of next generation audio systems. Multiple Newton devices are easily interconnected to form a network that is scalable to meet all audio applications. Powerful processing features and multiple audio network standards combine to make Newton the ideal control core for any audio system from Touring to Live Broadcast Events and Fixed Installations.

COAXIAL INPUT AND OUTPUT, BOTH CAPABLE OF 64 MADI CHANNELS

OPTICAL INPUT AND OUTPUT, BOTH
CAPABLE OF 64 MADI CHANNELS